surfresearch.com.au
Images courtesy of the Bennett Family.
A major manufacturer and supplier across the surf industry, the company maintained a high standard and a quality stable of shapers 1954 - 2001.
Barry Bennett started building hollow plywood boards in the 1950's at his mother's house in Waverly, South-side, Sydney.
In the mid 1950's he moved to the north side of the harbour, again under the family home.
The company has always maintained it's strong roots in the Life Saving Clubs, and has been a major manufacturer of surf-skis and rescue/paddle boards.
One of the Brookvale Six, that is the "large"manufacturers with national sales and reputation in the ten years 1962 to 1972.
195x? 2 Wyndora Avenue Harbord, North-side, Sydney.
Australian Racing Sixteens
One example with decal currently (June 2001) on display at 188 Harbord Road, Brookvale.

1957
Hollow timber adaptation of the Malibu board
Okinouees 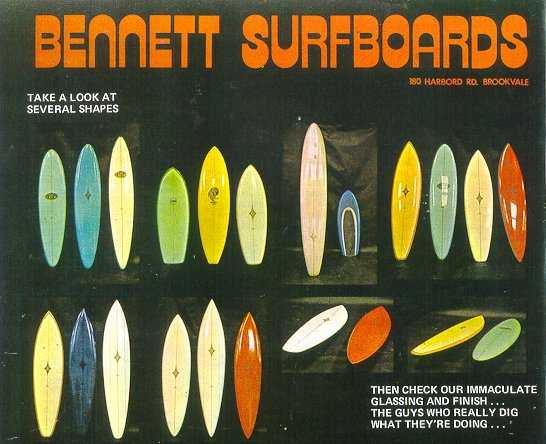 Nearly $500 worth of surfboard equipment, given by seven manufacturers, was handed over to the Australian Army on behalf troops in South Vietnam, at Victoria Barracks, Paddington, on Wednesday, July 20.