surfresearch.com.au
Bob McTavish : Pods for Primates - A Personal history of Surfboard Design, Part 2.
Tracks May 1973
Reprinted in The Best of Tracks 1973
Introduction
Bob McTavish's ground breaking and inspirational historical overview of Australian surfboard design from the early solid timber boards until the current designs, circa 1972, is a major influence on the creation of this web site.
The sub-title, possibly added by the editor, is most probably a reference to Kenneth Clarke's outstanding 1969 BBC television documentary and subsequent book, Civilisation - A Personal View.
Despite the poor editing of the article, the selection of images and the design layout are to Tracks usual high standard. 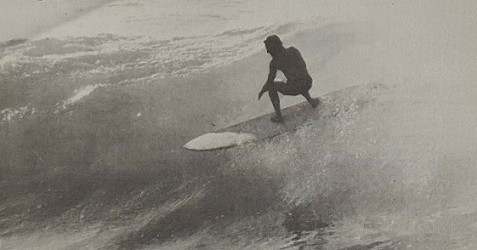 A PERSONAL HISTORY OF SURFBOARD DESIGN Part 2.
By Bob McTavish


Since boards went short in 1967, there have been many, many good surfers, many good designers and stacks of good surfing.
You can fill a library with tales of this era.
This record is only a skeleton and many good people won't get a mention because of space, but it gives an approximate trail of where we are today.

We could trace the change from the old trimming boards to the new short carving boards from two different lines.
Firstly, in America they smoothed out their lines before they went short.
Dick Brewer working with Bing (Surfboards) made his pipeline ("Pipeliner") series which were beautiful pin-tails, this was early 67;  by the end of the year he had made a couple of 9ft versions of these pin-tails.

Here in Australia George Greenough had been coming to our shores for several years riding belly-boards (sic, kneeboards - the Greenough Spoon) that carved and extracted so much speed and power from the wave, without having to use a turning point and separate trimming point, they were both combined together.
It became fairly obvious to surfers that had seen him that this was the direction to go.

Nat in Easter (April?) of 67 (1967) made a 9' 7" board with 6' (or 6'' ?) of V in the bottom which was based on a Greenough design.
This thing turned like crazy and carved incredible arcs. (seeHot Generation, Part 5)
Later on in the year Kevin Platt and myself at Keyo's (Surfboards) started making V bottoms.
First they were 9', then 8' 6" then 8', then down to 7' 1 0".
The first reaction of stepping on these boards was the incredible power and speed and bashing ability in a turn, in fact the first time you rode them, they usually flew out from underneath your feet.

At the same time Midget's(Farrelly) shop at Palm Beach was running stiff competition with us at Keyo's.
As we'd cut 2" off, Midget would cut 4" off, then vice versa. Page 21
We took our boards to Hawaii in late 67, they were, just large versions of V bottom stubbies we were riding in the shorebreaks of Australia and they were pretty miserable failures except for Nat's board which was more of an arrow planshape and Ted Spencer's little double end sausage ('Little Red ') which went well in small surf.
(see Hot Generation, Part 6)

Midget took to Brewer's ideas and came back making pin-tails.
Up on (sic) the San Juan (Surfboards) factory, in Byron Bay we started making 7' 8" then 7'4", then 7', they were getting shorter and shorter, lighter and lighter.
Finally we sacrificed one layer of (fibre) glass and broke the 10lb barrier.

The same things were happening in shops everywhere.
Down south Wayne Lynch was making 7' 6" very full pin-tails with a V bottom in the middle which gave him a tremendous looseness and the width of the board gave a lot of speed and power and he could direct this speed onto vertical work, he was punching up through the  width (?- lip?) heading up vertical and coming upsidedown for a brief second, he  was really pushing it a long in this direction. (see EvolutionPart 1)

Late in 1968 Nat (Young) was making his skis (Ski by Dewey Weber Sufboards, USA, see Evolution , Part 5?) which were soft railed, for in 69 in Hawaii it was Joey Cabell, Brian Dobson ( ? Ryan Dotson)  and Dick Brewer who were the top designers, making speed shapes with narrower noses, longer lines and the rails were getting lower and lower.
By then I was riding approximately an 8' board in 12' Sunset surf. (seeSurf International, Vol 1 No. 6 1970? pp 8 to 11.)
Meanwhile in Australia we were going the opposite direction, the boards were getting short, the rails softer and softer, this is when the Greenough hulls took on with very high. rails in the front turning down at the tail.

This is when Ted Spencer was making white kites (White Kites) at Shanes (Shane Surfboards) with a soft rail all the way thru.
David Treloar was making soft rail foils at Nippers (Nipper Williams Surfboards).
These boards you could really bank them over on the rail but when you got them over they did nothing.
There was the occasional exception, Gary Keyes made a board at Angourie that had almost down rails and about 1/4" of shape up from the bottom, much like a modern rail.
This board was very sleek, fast, smooth turning and even had a little bit of side slip release, but it was controllable.

Then (at) the end of 1969 Russell Hughes came back from America and brought with him a Dick Brewer board with down rails from nose to tail.
It wasn't the first; they had been around for a couple of years but only cranks and crackpots were riding them.
But now they had become the standard equipment in Hawaii.
Russell also brought back a Lopez board with down soft rails.
This really blew the Australian designers apart because they had been going in a soft rail direction for some time.

To suddenly step on a down rail gave you so much speed that you could see a section looming way ahead and you were past it before you knew what to do with.
It certainly took a lot of adjusting.

Their application in Australia came first in the side-slipper.
It was short  with down soft rails and a small fin, which prohibited hard banking but allowed for beautiful side slip release.
It was certainly amazing to see a graceful surfer release his fin and travel side ways in a full drift down the wall.

This design took on with quite a large group of surfers, amongst them Midget, up and coming Terry Fitzgerald, Col Smith, whereas Nat and Ted Spencer investigated another direction (.)
(They) they went shorter and shorter, broke the 6 foot barrier, put on big fins and still using fairly soft rails but down they were riding micro-stubs.
Meanwhile Geoff McCoy started his shop and started to promote this style of board in the Sydney surf.
It was quite successful, had its fair share of speed overturn, if the waves were short and powerful it did quite well.
But they had very little reserve of speed, they couldn't carry a super long arc.

When the World Contest happened in Australia (Johanna Beach), at the end of 1970 it really impressed most people to see all the American surfers specialising in their own style of board.
Some were long, some short, some side slippers, some were carvers, but its obvious now the trend was towards speed, the rails were low, the plan shapes were drawn and since then in Australia this has been a standard design which has survived thru all the fads and changes.

Twin fins (1) hit not long after this (Summer 1970-1).
They took on quite well but they weren't all good designs.
They are a hot dog board, they allow you to turn incredibly well on mushie (sic) waves.
Its even a different kind of turn, like a ball bearing turn or skateboard turn.
You can really push your momentum around and thru a tight little arc.
But as the desire for speed came on stronger, the twin fin plan shapes went narrower and rakier and this defeated their purpose.

Nat was making some beautiful boards at this time, he came back from the Islands with some beautiful Cabell shapes, the rails were large boxy, they had a fair bit of bottom curve tail lift which was a new thing at the time, a sensible thing. (see# 38)

In 1972, the twin fins had gone, the tri fins made a brief appearance but it didn't hold for long and it was basically seat (sic?) speed shapes.
A few different freakie things came in, in 1972 there was extravagance in tail lifts, there were super large soft rails almost like surf mattress rails, there were tucked under rails, radical box rails, then we saw the appearance of the keel. (see# 336)

This seemed good potential direction, they are yet to prove themselves.
And this year 1973, we find it still the same thing, it's speed shapes, it's down rails, it"s the soft bottom line, smooth nose entry.
We have lots of designers all tampering with relatively minor aspects of the same design.

We find Midget making hard tails and some beautiful pin-tails.
Geoff McCoy is making nice speed lines, Bill Cillia, Tim Rodgers, Kevin Platt, John Blanch, Bob Cooper, Pat Morgan,  there are many many more.
There seems to be a current of unrest running thru the various surfing communities.
Some people still want more speed and why not!
Some people want more banking abiliy at high speed, for instance whatever happened to nose on the water turns that we could do in 1968 and we never did get upsidedown for very long, did we.

The Greenough bowlers (Hulls) at Angourie did it but what about everyone else, and everywhere else.
What about out thru the back, a board going at todays speed should be able to leave the wave entirely and glide on the flat water behind the wave for a while and then back in over the lip and into it for more speed.

Maybe there is a radical new design needed, maybe we have touched on it over the past 6 years, maybe it was chines, maybe it was tucked under tails (rails?), maybe it was full length V bottoms, maybe its in the fin.
While we are waiting to see what comes up, a lot of surfers are finding themselves going towards smoother, more artistic surfing.

They are using the speed and the obvious sensitivity and control of the down rails to put themselves in very tight positions and doing it gracefully and beautifully.
Even if the change doesn't come up in the near future we are certainly going to see a lot of progress in this direction, smooth, fast, flowing beauty.

One thing in retrospect shows out really clearly.
Since 1967 we have Iearnt to ride powerful waves.

In 1966-67 the ultimate wave was Noosa, it was Crescent, perhaps small Angourie.
It was a long clean wall.
Now we're after juice, whether its tight,  whether its long, high, short, thick, as long as it has some juice we are into it.
Are we neglecting the long small waves of Noosa, Byron Bay and Crescent, maybe someone should be back on an updated 9 foot board, perhaps a 10 lb version of it, doing all the old things we used to admire so much, the speed from trimming, the stalling, pivoty turns, the graceful screaming nose rides, the head dips, the fun.

At least now our eyes are open to Australia's big wave potential.
The waves we used to watch break but didn't consider riding them we are now hungry for.
There is lots of juice pumping in around our coast, there's still lots of breaks, where the crowds don't get and where our boards allow us to go, to use and really get into it, but it can go a lot further. Extra Images.