Unfortunately it's got really bad delam on the deck as you can see in the
pics, a few people advised fixing it, but I like to keep all my boards
original.


DESIGN HISTORY
Following the heavily forward foiled templates of the Tracker and Pin/Round tails of 1968, some Australian designers returned to a wide planning tail, continuing a Greenough influence first seen in the Vee bottoms of 1967.

McTavish compared the performance differences between the longer/narrower Hawwaiian designs (Streaks) and the short/wide boards (Slugs) in Streaks and Slugs, a Surfer Magazine article published in May, 1970.

The North coast squad was occasionally accompanied by Ted Spencer and Robert Coneely, among others.
Ted Spencer shaped and designed his White Kite model for Shane Surfboards, Brookvale.
Coneely produced similar designs for Queensland's Hayden Surfboards which retailed through his Bondi surf shop.
Generally, the nose section was bowled with a high rail, commonly called a Hull,  but some later models featured a chine rail with a defined breakaway edge.
An early example of the chine rail featured on a McTavisn design circa 1966 (see #224), appeared on some of Greenough's later Spoons and is commonly found on modern Boogie boards (#30).

McTavish recalled the Hull in the second of his 1973 design retrospectives for Tracks Magazine, Pods for Primates Part 2:
"(circa 1969) Meanwhile in Australia we were going the opposite direction, the boards were getting short, the rails softer and softer, this is when the Greenough hulls took on with very high rails in the front turning down at the tail.
This is when Ted Spencer was making white kites (White Kites) at Shanes (Shane Surfboards) with a
soft rail all the way thru.
David Treloar was making soft rail foils at Nippers (Nipper Williams Surfboards).
These boards you could really bank them over on the rail but when you got them over they did nothing." 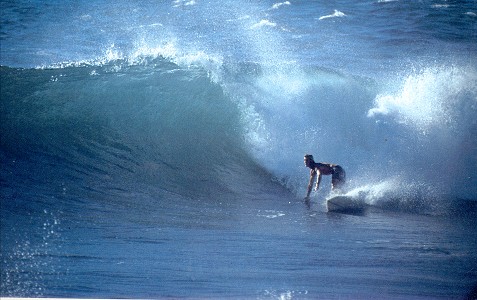