MANUFACTURE
MANUFACTURER: Backyard
SHAPER:  Lou Morath
DESIGN: Tom Blake Paddleboard ?
DESIGNER: Tom Blake.?
The image above is not  board #191
This board is also by Lou Morath but certainly made post 1939 and is a example of Tom Blake's Hollow board design.
Image contributed by Dick Morath, with many thanks.
See Source Documents: Plans and Specifications:
Paul W. Gartner : Hawaiian Water Sled (Tom Blake Hollow Board)1933

"Surf Ski c1933 -This is a surf ski of hollow construction with three ply veneer over a timber frame and a solid timber reel/fin sealed with pitch rails on top from centre to rear.
There is an inscription painted on the top front 'Lou Morath'. MO529
Gift of Lou Morath 1984."


Photograph by Ray Leighton:
Manly Surf Life Saving Club's top boardmen in 1939- 1940, Manly Beach, 1940.
Ray Leighton was a highly successful professional photographer who had a long association with the Manly
surfing community and often featured beach themes in his work.
This photograph is one of at least three of a shoot, probably the summer of 1939 - 1940.
The second is in Margan & Finney: Surfing History (1970) page  127 and the third is framed and displayed in the Manly Fish Shop on the Corso.

The Surfers (Left to right) :
M.B."Bossy" Sutton,
Geoff. Cohen - was the first Manly S.L.S.C. member killed in World War II and his board became the club's
War Honour Roll.
See Manly SLSC: Australian Surf Museum (2006) page
Harry Wicke  - was Australian Surfboard Champion in 1939-1940.
Jim Austin,
Lou Morath - came third in the Australian Titles and represented Australia at the Pacific Games in Honolulu in
1939.
Ken Simpson - was awarded a D.F.C. for service with the R.A.A.F.and was also killed in the war.

The Surfboards
In the centre are the tails of two timber framed/plywood covered boards based on Tom Blake's Hollow
design, circa 1934.
The othes are solid wood Alaia ('Church Windows' in Australia, 'Gothics' in mainland USA) of similar design to
the board used in Australia by Duke Kahanamoku in 1915. All the boards were finless.
Geoff. Cohen's board is still with the Manly Surf Life Saving Club, see above.
Lou Morath's board (#105)  is 8 ft 8" x 23 1/2" exists in original condition and is held by the Balmoral Beach
Club, Sydney.

...surfboard paddling races caught on in Australia, with two boardriders, Lou Morath of Manly and Keightly 'Blue' Russell of Palm Beach, included in the Australian Surf Life Saving team sent to compete in the Pacific Aquatic Carnival in Hawaii in 1939. The team was filmed at training for both Movietone News 10/15 (1939) and Cinesound Review 397 (1939), and again on their departure for Movietone News 10/28 (1939) and  Cinesound Review 400 (1939). However there was no footage of their arrival...or of the paddling race" 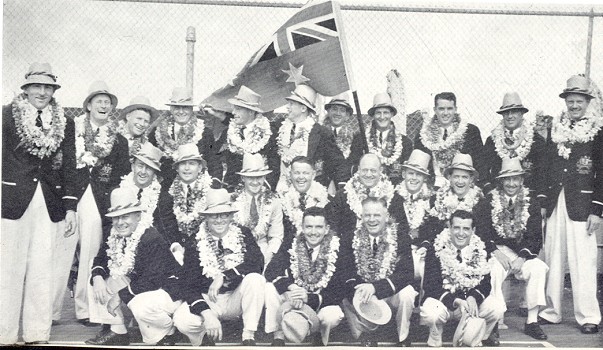 Note :
1. Location possibly Honolulu Harbour.
2. The red, not blue, Ensign is the team flag.
3. Officals as listed by Galton, see above, are credited as "visitor" by Harris.
4. The officals received special treatment, courteousy of the Sheriff of Honolulu.
See Duke and Surf ski image below.

The board is currently on display at
Manly Art Gallery and Museum.
Item Description :
" Surf ski (sic) board is of hollow construction made of three ply veneer over a timber frame with solid reel (sic, keel) fin sealed with pitch rails on top from centre to rear.
c. 1933
4320 x 550 x 170 mm
Collection of Manly Art Gallery
Gift of Lou Morath"
DESIGN HISTORY
See History : Tom Blake 1926 - 1935
The Hollow Paddle Board, a timber frame with plywood skin, was developed by Tom Blake in Hawaii. Around 1926, Tom Blake attempted to recreate some of the larger Olo design's that he had restored for the Bishop Museum, Honolulu. The first model was a sixteen foot solid board with a multitude of holes drilled through the blank, these were then covered on the deck and bottom with plywood panels.

He rapidly incorporated current aircraft and boat building techniques into surfboard design and his design of a light timber frame covered with plywood panels resulted in a huge weight reduction.
On 18th April, 1931  Thomas Edward Blake submitted three pages with a detailed drawing for a ' Water Sled'. and was subsequently granted US Patent No. 1,872,230 by the US Patents and Trademarks Office, Washington DC.Initially viewed with scepticism, the paddling advantages were emphatically demonstrated as Tom Blake dominated paddle races in California and Hawaii in the 1930s.

Aware of the life saving potential of such a craft and an enthusiastic promoter of his sport, Tom Blake gave his design international exposure by publishing  the blueprints and construction details, principally in various Popular Mechanics Magazines of the period. See below or Plans and Specifications. Publication saw the design rapidly adopted around the world, notably  Australia, New Zealand, Peru and South Africa. In these countries it had an extended life due to the lag before these countries caught up with the developments in fibreglass and foam. In Australia the design first appearred as the Racing 16 and was later modified to a finned Malibu (1956-1958) while in New Zealand the lag was even longer and hollow Malibu boards were manufactured up to 1961. (Maxwell page 240-241).


Circa 1934 Tom Blake added a small water ski type fin/skeg to one of his hollow boards. Although an significant addition, because of the emphasis on paddling, the small size relative to the board, the increased danger and the difficulty in attachment, many riders do not consider fins as a necessity. It rarely appears on Australian examples of long Hollows.

From: Tom Blake : Riding the Breakers on this Hollow Hawaiian Surfboard -
Popular Mechanics Magazine
July 1937 Volume 68 Number 1
pages 114 - 117
COMMENTS
1. Board probably dates from late 1930,s. The Museum's dating of 1933 seems much too early.
2. The board demonstrates high standard of craftmanship and design
3. The mitred deck panelling and the rolled bottom are significant features.