he probably had a  plan to get out of it
mctavish explains:
Today's dynamic positive surfing places tremendous demands upon the surfer's initiative and ability.
He is pushed into some pretty tight positions and he must pull himself out of them.
An expansive range of manoeuvres - ranging from the obvious to the obscure, has evolved as a result of this trend to push things to the limit.
Progressive surfers are refining and developing this range so rapidly that we figured it was time we paused, took a break, and reviewed our progress this far.

Here is a rundown of manoeuvres that are partially or fully adopted by the vanguard of Australia's progressive surfing push.

The direction is involvement.
Getting into tight spots and getting back out of them.
This is of course a supplement direction to the all powerful "make the wave" motive.

The way to get involved, obviously, is place yourself in a hairy position, under,  in over, around the curl, quite often in contact with it.
You can place your self in the actIon in two basic methods, turning and stalling.
That's simple enough.
But the actual variety of turn or stall is the diary part.

The turns indicate how to get into the action from below, above, or behind the eye. But to slip back into the pocket from ahead? Employ one of the many stalls. Try these. Perfect stall. No forward motion.
As the wave recovers and starts to wall, drop the fin in by back-peddling, recover some sort of trim, and move out.
Nat Young and I spent two days at Noosa working on this, succeeded about four times each.
The big problem is knowing just when the fin is going to break out.
We are working on special nose and fin shapes for this purpose.
Fig. 14 Right: There are the various techniques of getting in the tight spots.
Get your jollies back in there, and then try to get out, and make the wave.

To get out of the hot parts you'll need three things.
Acceleration, speed, knowledge of handling trouble spots.
A few handy acceleration techniques.

Once you've accelerated into a screaming long wall, you'll want all possible speed. (c) A FEW TIPS. Keep the board clear of falling white water.
Go low through chop.
Crouch low in hard offshore winds.
All these things mean a little extra when it's needed.
Speed itself isn't all that important, it's acceleration that makes the difference usually.
Knowledge.
Just when to accelerate. Just how to get around trouble.
How to get out of it, too.
Here are a few assorted helpful manoeuvres which can be used to get out of dicey spots, or to get a little more out of a wave  Well there are the actual manoeuvres.
Selecting the instant to utilise them is up to you.
The tighter you push them, the longer you hold them, the more involved you are, the more situations you can overcome, the hotter you are.
Surfing World
Volume 8 Number 4 pages 15 to 21 ???
January 1967
Original photographs by John Witzig, possibly others. 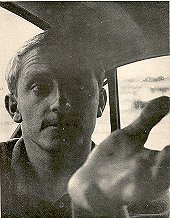 NOTES
The Text
Written late 1966 and published January 1967, the article is a comprehensivesive examination of performance surfing, circa 1966.

Within six months of this article,  Bob McTavish (and others) would reduce board lengths from 9ft 6'' to 7ft 6'', rendering the Malibu board (and large sections of this article) obsolete for the next fifteen years.

Apart from the inclusion of state of the art manouvres (Fin Drop Out Stall and Cut Back Over the Falls), it is the re-defining of surfing direction that had a huge impact on Australian surfing....

The direction is involvement ...
a hairy position, under, in, over, around the curl, quite often in contact with it.

Modern surfing could be said to be essentially defined by this  Involvement Principle and the subsequent BREAK OUT FROM THE STAIGHT LINE. featured in "LADIES AND GENTLEMEN AND CHILDREN OF THE SUN...." SURF INTERNATIONAL Vol. 1. No. 2 1967-8? p 9.

The Images
The introductory wave (top - Wreck Bay?), portrait (bottom) and Figures 1 to 12 accompanied the original article and are probably by John Witzig.
Images 13 to 18 have been added to this page.
Where possible the images are of Bob McTavish or representative or the era.

Fig. 14
Bob McTavish fin drop out stall/side slip, Duke Kahanamoku Contest, Sunset Beach December 1967.
Photograph by Dave Darling
i.  The accompanying image may or may not be a controlled Fin Drop Out Stall.
The performance of the wide tailed Vee bottoms of Nat Young and Bob McTavish were derided by many Hawaiian designers
ii.  Explored  by Bob McTavish and Nat Young in 1966, the Fin Drop Out Stall, was briefly revisted 1969-70 by Reno Abellira in Hawaii and Midget Farrelly in Australia with the development of the Side Slipper.
iii. The Fin Drop Out Stall returned to surfing in the late 1980's when it was combined with a Re-entry to produce a Floater.
Accompanied article by Derek Hynd about Bob McTavish and the Vee bottom, Decemer 1967...
Plastic Fantastic Machine1967
Surfer Magazine, April 2002 Vol 43 No 5 page 60

Fig. 19
Nat Young, Sydney, Australian championships, 1968.
Photograph unknown
Descibed here as Cut Back 'Over the Falls', this was to be subsequently become a standard manourve and named a Re-entry, Roller Coaster or Re-bound.
Margan and Finney : Pictorial History  page 212