DESIGN HISTORY
The Side Slip (Fin Drop Out Stall) was first identified in 1967 by Bob McTavish in an  article titled bob mctavish is in this  wave. he probably had a plan to get out of it.
Surfing World January 1967, pages 15 to 21.

A detailed compendium of manoeuvres of the era , it includes:
FIN DROP-OUT STALL
is by far the most efficient, most difficult.
If performed correctly, it can eliminate a cutback.
Everyone has experienced a fin drop-out and its main effect - loss of forward motion.
When emerging from a hot hollow section it's possible to remove the fin from the wave intentionally, and establish a sideways drift towards the beach.
Perfect stall.
No forward motion.
As the wave recovers and starts to wall, drop the fin in by back-peddling, recover some sort of trim, and move out.
Nat Young and I spent two days at Noosa working on this, succeeded about four times each.
The big problem is knowing just when the fin is going to break out.
We are working on special nose and fin shapes for this purpose.

IMPORTANT : Not to be confused with "slipping the board " - a nose riding manoeuvre that does not disengage the fin.
As demonstrated by Miki Dora in Bruce Brown's The Endless Summer, 1964.
This was described by Bob McTavish in the above article as:
SIDE SLIPS can be performed anywhere on the front half of the board.
They throw the board out of an inside rail stall, and set up a highly efficient trim for half a second while the board is banked outwards.
This half second or so allows the board to leap forward.
The acceleration is noticed as soon as the sideslip is checked, and the momentum gained from the small drop is redirected. 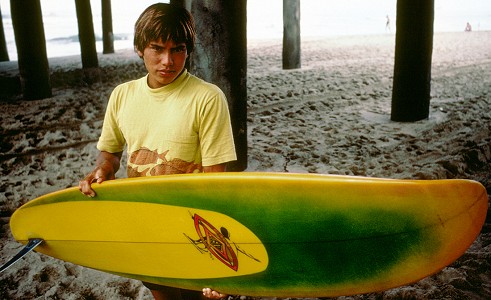 Reno Abellira and Inter-Island Side Slipper with hyper-kicked nose, Huntington Pier, California, 1969.
Photograph Art Brewer - Nat Young : History,  Page 104
To initiate the side slip the fin had to be dis-engaged, so the design critically relied of using smaller and inter-changable fins. Fin boxes were virtually a required addition.
This demand encouraged research into fin boxes and by 1972 the Bahne system became an industry standard.
A flat bottom with a down soft rail that reduced the possiblility of catching edges was used to control the side-slip and re-engage the fin
Subsequent to this design down soft rails  became an industry standard.
A hyper kicked nose reduced the chance of burying the nose and helped in recovery.
Nose lift and bottom rocker variations would be extensively explored by designers for the next 30 years.
In Australia the down soft rail, with a release edge, was developed through the experiments of Gordon Merchant. (Find relevant articles)


In Australia the design was taken up by Midget Farrelly (Farrelly Surfboards) and Terry Fitzgerald at Shane Surfboards.
The only board that allows the surfer to ride sideways, backwards or in a spinning circle.
The slipper has advantages a conventional board lacks
Speed comes easy,  control is super positive through the flat bottom and low, soft rails.
Basically, the board is longer, thinner and a diamond shape in outline.
The fin is smaller to facilitate release only when desired.
The rails amd bottom allow a shallow draft fin in any case, and the fin used is both adjustable and removable.
Midget has ridden this shape in most every kind of wave.
Reef surf was where the speed from the bottom and the rails was best put to use.
In beach break the board responded to all manouvres and created new freedoms with side slips to hold curl position and 360's to fill the gap between peaks of sections.
Fantastic sensations can be had riding whole sections backwards.
The most average surfer is going to find this surfboard easy to ride.
Thje side slipper can't be compared to any other board that has gone before it.
The only limitation this surfboard has is the surfer who rides it.

The validity of slide slipping as a manoeuvre was hotly debated and at the 1970 World Contest it appears that the the judges were not impressed.

Although Reno Abellira and Midget Farrelly rode Side Slipper designs, there are no contest photographs of them (or others) side slipping.
The situation is similar in Paul Witzig's Sea of Joy, 1971.

Due to the lack of suitable wave conditions, the required high skill level, the potential for confusion in crowed conditions and/or the rejection  by contest officials: side slipping receded dramatically.

The manoeuvre, despite all predictions, would re-appear in the late 1980's initially as the Floater, credited to Mark Sainsbury.
In an extended re-entry the rider disengages the fin and slides the board across the back of the crest.
Such a manoeuvre was unthinkable in 1969 without the performance, particularly the recovery control, provided by Simon Anderson's Thruster.
Along with the development of getting air, modern surfing since the dawn of the 21st century commonly incorporates variations of the side slip.