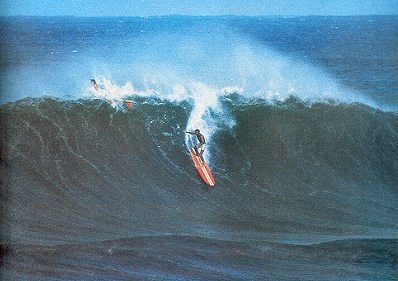 My whole life is this wave.
I drop in, set the thing up and, behind me, all this stuff goes over my back; the screaming parents, teachers, police, priests, politicians—they're all going over the falls headfirst into the reef.
And when it starts to close out, I pull out the back pick up another wave, and do the same goddamn thing.

Waves are the ultimate illusion.
They come out of nowhere, instantaneously materialize, and just as quickly they break and vanish.
Chasing after such fleeting mirages is a complete waste of time.
That is what I choose to do with my life.

Dora Story #512 : Bob Cooper, as told to Andrew Farrell, editor Australia's Surfing Life.
One time he (Bob Cooper) told me this classic Mickey story.
Apparently Dora would never show up at Malibu unless it was just pumping.
And when he did show up, he'd say something offhand like; "Hey, man, I was over in the Valley and I just knew it was going to be cranking so I came down."
The whole crew was always baffled.
It was a big mystery as to how Mickey could be so on it and never get skunked.
Then one day Bob turns onto the freeway and whoah! ...he just happens to be right behind Dora!
So he thinks to himself, 'I'll just follow him for a bit and see what he gets up to.'
After a while they wound up in Malibu and Mickey turned down some little side road beside a house, just poking the nose of his car out far enough to check out the point.
It seems that if the surf was good, then he'd just swing into the carpark.
If it was bad, he'd just go home with no one the wiser.
How classic is that?!
- Andrew Farrell : The Tale Spinner
Australian Surfers Journal Volume 3 Number Two,  Autumn 2000.  Page 68.
1966 da Cat by Mickey Dora : Greg Noll Surfboards