Introduction
An edition rich in surfboard design it includes an extensive range of designs in an advertisement for Farrelly Surfboards and an article on rocker by Bob McTavish (R.McT).
Some of the images have been rotated.
Page 26

Dimensions 6' x 19"
The Whiska is changed.
The fast lines and even volume are the same as before.
The out­line has been altered to give a tighter fitting tail design and the nose is sleeker for gentler entry as the waves of Autumn begin to hollow out.
The rails have been changed to a more positive shape being low and soft but now rising a little faster to the deck to give a slightly squared effect.
This change gives added thrust to the turn while the board is up on the rail.
The flatter deck is certainly more stable for toe and heel pressure and the overall impression the board now gives is that it still looks very easy to ride but it is a much faster piece of equipment.
We vary the thickness of the Whiska to suit the style of the indi­vidual surfer.
As before, a thinner board sits tight to the face of a good fast wave, while slower waves demand more buoyancy.
The nose is built thicker for positive entry and the tail is fine and sensitive for rapid direction changes.
The bottom of the board is basically flat throughout with a slight vee in the tail to keep the board laterally free tor the turn at higher speeds.
When any board moves fast over water traction increases with greater surface contact making it desirable that the tail should be able to break free tor  direction change.
The 1/4" of vee achieves just this.
All up weight of the board is around eight pounds.
The rugged glass job employs only the best volan and silene cloth.
The foam we make here at our factory, trade name Surf blanks.
Many smaller manu­facturers have taken to buying our blanks because ot their strength and resis­tance to delaminating.
These  smaller manufacturers are as concerned as we are that the surfer can trade his board back with out dropping all kinds of money just  because the deck has blown off in a blister.
Another  result of using this tougher foam is that the glasser doesn't have to load the tail up with cloth patches to protect the pres­sure points thereby unbalancing the board by making it tail heavy.
You can put one, two or three tins on the Whiska for different turn characteristics.
A single large fin for general purpose surfing, twins for pivot and drive up the face, and the tri set up for no-spin turns and added thrust out of the turn.
The use of the fin box, though slightly more expensive adds to the strength of the fin and tail and means that the board can be converted to ex­perience different fin set ups.

THE ROUNDTAIL
Dimensions: 6' x 19"
The roundtail is a balanced de­sign that can definitely be considered a general purpose surfboard.
If a wave had to be ridden at six feet in a variety of breaks any­where on our coastlines the roondtait could handle it.
The outline of the board is responsive to the kind of waves a surfer would expect to encounter year round.
The thickness is even throughout and the rocker flows in an even curve.
The balance of the board's weight is slightly forward to tip into speed at the slight­est opportunity.
The rounded tail is very smooth through the turn giving sus­tained drive at the be­ginning and end.
The deck is flatter for foot grip and the rail low and sensi­tive.
An average or better surfer can generate an even rhythm with this design keeping the pace up while moving into all known posi­tions.
Wave range for the roundfail is approximately two to eight feet.
The design will handle up to ten feet under perfect conditions.
A '69 or the 'low raifer' would have the advantage from eight feet because of their reduced tail area.

THE BELLY RIDER
Dimensions  48" x 19'
This thin, high speed design was created for maxi­mum performance across any challenging wave.
This same design has been used in Hawaiian surf up to 15'.
There is no other design in Australia like it since nobody has explored the exact design potential.
Given a good wave with the slight V bottom and hard edges will out race high speed gun boards.
The nose is sensi­tive being thin and scooped.
A foot before the tail the deck is humped to carry the chest ol the surfer.
Full carving turns can be had by burying the squarish extremities of the tail.
With either a large single or two small twin fins the Belly Rider is very positive and free in handling.
N.B.This is a board designed specifically for surfers who don't get to their knees or feet.
It is strictly for the belly rider due to its finely balanced profitle and minimal flotation.
Lengths and widths can be varied on request.


THE BELLY KNEEL-RIDER COMBINATION
Dimensions 5' x 20"
Many surfers have begun to explore the possibility of using a board that performs more than one function.
It would seem that the ideal piece of surfing equipment could be ridden lying down, kneeling up, and possibly in the standing position.
Waves allowing this is just what the BK is designed to do.
The board is shorter than a conventional board to facilitate leverage from a very low centre of gravity.
It is also just barely long enough to be operated from the standing position.
Imagine the potential for this board in all kinds of Summer waves.
The bottom of the board features a slow curving line lengthways that guarantees lateral freedom at speed.
The rails are low and fairly soft.
The deck is scooped up to 1/4" to make a well and to put the surfer a little closer to the water without interfering with the rail thickness.
The BK makes use of one large fin or else two smaller ones, depending on the turning characteristics demanded by the rider.
There are two basic prices for the BK Rider $80 with­out a wood strip, and $85 with.

THE SHELL/SPOON
Dimensions: 4'10" x 20"
Rugged construction and functional lines are what makes the shell the ultimate eqipment tor the knee-rider surfer, and a hollow curl.
Fifteen layers of 8 oz keep this little machine together, through all the stressing turns it can be pushed through in better than average wave.
We pur­posely avoid making the tail too flexible as this cuts down the board's strength and performance in faster, heavier waves.
The standard fin for the shell is large and swept back.
Rotation is good with the foam section and the all glass centre is concave on the underside.
Longer high speed hells with lower rails can be built on request. 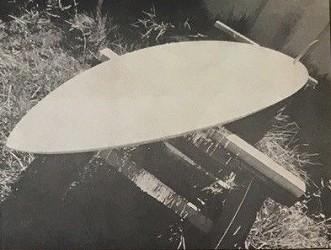 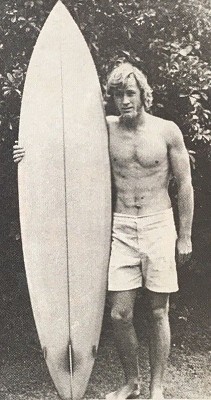