Introduction
The First Annual End of the World Issue was a highpoint under the editorship of Drew Kampion,
Pages 54-55 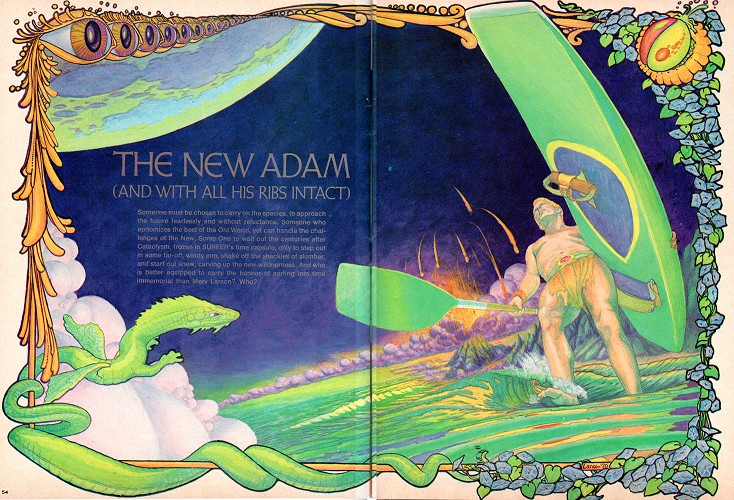 "Ladies and gentlemen ... in our au­dience tonight we have a man you all have heard about... a truly great American ... a mild-mannered indi­vidual ... a credit to his community . . . let's have a big hand for our special guest tonight. . . stand up and take a bow, Superman."

You can see for yourself when Rincon's breaking good, or Secos and Huntington when they're on.
He works out through the lineup on his butt, sitting on a foam cushion, buckled into his seat belt, working a double-ended paddle, with his feet stuck out in front of him and fastened into the stirrups of his surf ski.
If you paddle up to him and ask him what kind of a board that is, chances are he won't answer you.
Not because he's uptight.
Because he doesn't hear you.
For within the plas­tic shell of his helmet, Joe Cocker is wailing through "Hitchcock Railway."
And when he's listening to "Hitch­cock Railway," Merv Larson ain't pickin' up nothin' else.
Merv Larson is a lifeguard.
He's been doing it for fifteen years, since he was fourteen.
He likes it.
Spends his life in his Ford Vanette, a large mobile unit that he has outfitted to suit the needs of himself and his German Shepherd, Dingo.
At present, Merv is stationed at the Leo Carrillo State Beach Ranger Office, right where Mulholland hits the Coast Highway near Secos.
He has attained the ranking of Lifeguard Supervisor.
Merv Larson is no less amazed than you are that you haven't heard of him.
"I've been doing these things on the surf ski for four years, and all of a sudden everybody is beginning to no­tice."
These things?
What Merv Lar­son does on his surf ski is as visually exciting, maybe even more so, than what Greenough is doing on his knee-board, or the top conventional surfers on their surfboards.
You might say that Nat Young and Jock Sutherland probe the outer limits of performance on their feet.
Greenough does it on his knees.
And Merv Larson?
He does it on his ass.
Not to take anything away from it either, because for high-performance wave riding, nothing can quite top the ass as a good place to sit while riding a surf ski.
In fact, says Merv, "In three years, I've never had to swim.
Some people are afraid of these things be­cause you're strapped in, but the effect of a wipe-out is a lot less than it would be on a surfboard.
"Merv surfed standing up from the time he began lifeguarding at fourteen until he took up the ski a little over three years ago.
And he became quite a good surfer.
Then he discovered the ski and found that whole new worlds of performance opened up.
"I still haven't found out all the places this thing will go yet."
He has, however, discovered quite a few.
"Skiing," says Merv, "is wetter than surfing; once you're on a wave you be­come a lot more involved.
Actually it's a cross between mat riding, belly-boarding and surfing.
The only thing

One of the hang-ups with surf skis is that paddling back out to the lineup is super fast.
This causes trouble with the prototype artisans:
"Five skis would fill Rincon on a good day," Merv la­ments.
"It's hard for ski riders to exist where there is a heavy surfing popula­tion.
If a skier isn't careful, he rides too much and guys get hostile.
You have to hold yourself back and let the surfers ride their share of the waves."

Merv Larson is also very concerned about preserving his amateur standing as a waterman.
He shuns commercial­ism, professionalism, and all the other dank corners of sell-out in order to maintain his amateur standing so he can compete in the Olympics in the Kl and K4 Kayak Flat Water compe­titions.
The Olympics is as important to him as anything in his life.

Yet Merv Larson considers his own greatest contributions to Twentieth Century Living to be his sound sys­tem.
The one that makes it impossible for you to get his attention in the water.
He carries a small waterproof pack with a super-quality transistor radio encased, runs a plastic tube into each ear pocket of the helmet with spe­cial ear insertion mechanism, and the rest of the world is replaced by Joe Cocker in his finest hours.

"Having the music," says Merv, "is so fine.
Like last week at Rincon.
It was small; there was a heavy crowd, and a lot of people were unhappy.
But I had my music on, and it was running right, and everything else was separate from me.
I even got hit twice with other guys' boards and didn't mind.
The secret is to eliminate all outside sound.
It's not just enough to have the music.
You have to have only the music.
Then everything is fine.
Except when you roll a wave and the sound turns into a static fuzz while you're under water.
Then it's back onto music when you come up.

It has to be a fantastic experience to surf in a world of beautiful sound, with harmony, lyricism, and melody flowing over and reinterpreting all that goes on outside of your head.
It must be.
Merv knows.

What is especially exciting about Merv Larson is that he is a man alone in a world of tension, strife, conflict and chaos.
What is especially exciting is that he has created his own place in that world, both within himself and within his environment.
In fact, he has produced his own environment.
One in which he can operate free from hassles.
One in which his independence is the most important thing.
That's why, when you see him at Rincon on a good day, flowing with it all, you shouldn't get uptight if he doesn't respond to you.
You are simply not part of his environment.
You are not part of his life until he wants you to be.
What better man to survive the perils of the Time Capsule?
The perils of life in a New World?
Page 129
Full Color Murals

Other articles in this issue include:
George Greenough article, photographs of GG surfing at night and from The Innermost Limits of Pure Fun.
Toward Unencumbered Flight: Kneeboards, Spoons & Paipos..