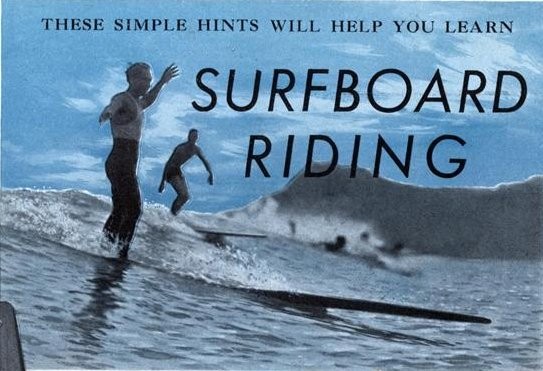 [Above:] Cigar shaped boards of the air-chambered design.
The longer board is used principally for paddling races.

Choose your board according to your size and weight.
A youngster may find an eight-foot board quite adequate, while a tall, 200-pound man may have his best success with an air-chambered board not shorter than twelve feet.
The average person will not be making a mistake if he practices with a surfboard somewhere between ten and twelve feet long, approximately twenty-two inches wide, and weighing not more than fifty pounds.
In this classification you have a choice between the traditional ten-foot board, usually built of light balsa wood, and the

But whatever the method, the stroke is made with the wrist and arm tensed, and fingers cupped together.
Relax as the arm is being carried forward.
On the hollow racing boards, practiced paddlers can sprint at approximately twice the speed of champion swimmers.
Distance also is possible on the paddle board.
Beach guards of Santa Monica, Calif., recently paddled from the mainland to Santa Catalina Island, a distance of more than twenty-six miles, in less than six hours.
The paddle board also suggests adventure on lakes and broad rivers.
When resting, merely sit upright on the board, astraddle near the point of balance.

When paddling, you have two methods of guiding your thin craft.
To negotiate a slight curve, it is necessary only to vary the power of your strokes, or to dip one hand shallowly as you increase the force of the other.
But in order to turn sharply, it may be advisable to drag one foot as well.


When attempting to pass a breaker at “this point, it generally is advisable to slip from your board and, holding it firmly by the stern, drive it deeply into the rolling water, ducking as the crest of the wave sweeps over you.
Should you happen to lose hold of your craft, remain submerged until the breaker has passed, and even then come up with your arms above your head.
Strong men have been knocked unconscious when struck by a runaway surfboard.
Now that you have become familiar with the buoyant surfboard, you must learn to judge waves.
Except when swells are uncommonly high and steep, the best point to catch a wave is just outside the area where local breaks begin.
Where there are shoals you will find the first crests of white water.
Heavy ground swells generally run in series, and most riders prefer to let the first one or two go by, since the later waves usually are smoother and better for riding.
It is the habit of these largest waves first to break locally, and the white crests will gain breadth in accordance with the shallowing water.
It is on this smooth “shoulder” beside the foam that surfboards slide to the greatest advantage.

In hitching to a wave, it is important that you keep your board at right angles to the advancing slope of water.
Keep well back on your water sled, so that the bow will ride fairly high, particularly if the wave is steep.
Try to paddle at approximately

GUIDE your sensitive craft by shifting your weight from side to side. If the bow appears to be dropping, take a short step backward to alter your balance slightly. Conversely, a step or jump forward will tend to lower the bow and send you farther down the slope of the wave.
A zigzag course can be maintained by careful steering.
Expert wave riders have been known to dart in and out among the mussel-crusted pilings of a pier while standing erect and steering solely by balance.
At length, you approach shallowing water and the point where all waves must break.
To prevent any mishap in the breakers you will “cut out.”
Step well back on your board and, as the bow lifts, lean sharply to one side.
This will allow the wave to pass on beneath you.
Once you have escaped a wave, however, be quick to paddle seaward again, lest you be mauled by the following breaker.

Sometimes a rider is able to survive the break and continue his ride clear to the glistening sand, but no matter how experienced he may be, there always is considerable danger when passing the break.
Short rides can be had on waves that already have broken. In fact, this elementary form of surf riding has a considerable following, especially among younger swimmers and persons with small, improvised boards.
In catching a half-spent breaker, keep well back on your board and paddle strongly as the water rolls against you.
Sometimes you may be carried to the beach.


IN “BODY SURFING”—riding waves without a board—the technique varies from that practiced on the surfboards.
Although very steep swells may be taken in this manner, most body surfers elect to catch a wave just as it is breaking and then travel with their heads and shoulders just ahead of the “suds.”
Where the breakers are not strong, you may find it a help to kick the feet while under way, or to bend one or both legs at the knees.

Some “body surfers” prefer to extend their arms forward, but you will note that under most circumstances the most proficient performers will keep their arms close to their sides.
This position allows the chest, which is the body’s region of greatest buoyancy, to be as far as possible in advance of the rolling water.

And now, as we rest upon our surfboards, awaiting a green swell which moves silently toward us, let us hail the cradle of the wave rider — Hawaii.
May we salute, also, that ancient island conquerer, King Kamehameha I.
Legend tells us that, even when old in years, he was a skillful wave rider.
But surely no man is old who can hitch his surfboard to the untamed waves.
To him, and to those other sunny-souled people of the islands, let us be grateful for at least one secret of prolonging youth.