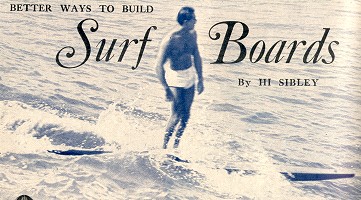 Perfectly balanced on a homemade surf board,
this Balboa Beach (Calif.) youth is riding a ground swell, not being towed.

At the California beaches there are schoolboys who easily rival the best Hawaiian experts in the thrilling sport of surf-board riding.
That is partly because of the superior surf boards they use - light, buoyant, and beautifully finished.

With the aid of the accompanying drawings, any amateur woodworker can build equally good surf boards.
These designs are of the type used at the Newport Harbor (Calif.) Union High School, where construction of surf boards is a specialty.
Two of the plans are for large boards, which may be paddled far from shore and used in deep water; a third design is for a smaller and simpler board of the tobbgan type; and the fourth is a child's paddle board.

The balsa-wood surf board show in Fig. 1 is so light that it can be carried about easily, and it has exceptional buoyancy in the water.
Since balsa has no great strength in itself, the board is reinforced

with redwood longerons and a central backbone of spruce sandwiched between two pieces of redwood.
There are no nails or screws,the sections being securely held together by dowels and casein glue.

The first step is to make the backbone.
It is a 1/2 by 3 1/2 in. strip of spruce glued between two 3/8 in. redwood strips of the same width.
On each side of the backbone, glue balsa timbers, 3 1/2 by 4 in. by 10 ft. 11 in.
Continue to add strips of redwood and timbers of balsa, as indicated in the cross-section drawing. Two dowels, marked B and C, should be inserted before the two outer pieces of balsa are put on. Their centers are located 1 1/2 in. from the top.
When the assembly is completed, shape the built-up plank by cutting the outline as illustrated in the plan drawing.
Allow about 1/4 in. all around for trimming to exact size.
Before doing the trimming, however, plane the bottom to a taper, fore and aft, from the widest beam, which is 30 in. from the nose.

After the board has been planed and sandpapered, glue the curved sections on the nose, and add the stern piece, which should be of redwood.
When the glue has set, bore holes for the dowels and insert them.
Note that the centers of all except the two previously mentioned are located about 3/4 in. from the top.

The 1/2 in., half-round molding should be neatly fitted, and the finish will be greatly improved if
redwood plugs are set in over the ends of the dowels.

If waterproof casein glue has been used liberally in all joints so that water will not seep into the porous balsa, give the entire board four or five coats of spar ...
(Continued on page 91) 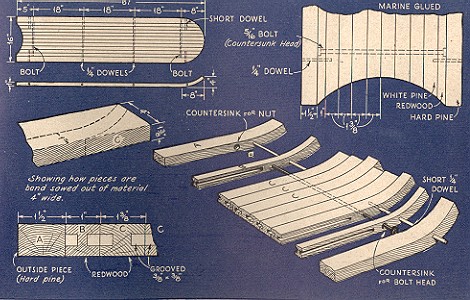 varnish, rubbing well with steel wool after each one except the last.

Bear in mind that this type of board is not expected to take punishment on rocky shores or on gravel, because the balsa is easily dented.

The laminated redwood-and-pine board shown in Fig. 2 is similar in appearance, although it differs some-what in construction, having air cells cut in the solid wood.
It is put together with 1/4 in. dowels and two 5/16 -in. bolts with countersunk heads and nuts, as illustrated.
Casein glue is used between the joints.
Care must be taken when planing the assembled unit that you do not cut through into the air cells. This board should be varnished in the natural wood.
Apply about four coats, and rub the first three, when dry, with steel wool.

The curved-head or toboggan type of board is illustrated in Figs. 3 and 4.
This is adapted to ordinary surf in shallow waters, but is not intended to be paddled far from shore, as may be safely done with the others.
It is a favorite with concessionaires at public beaches.
As will be noted in the drawings, the fore ends of the pieces, one of which is shown in Fig. 3, are not bent, but are cut from straight stock.
As the two outer pieces are 11/2 in. wide, they obviously must be band-sawed from stock that thick, and 4 in. wide.
All of the ten inner pieces are grooved, as shown, to reduce the weight.
Dowels, casein glue, and two bolts are used in the assembly.
This type of board also looks best if finished in the natural wood with spar varnish.
The child's paddle board, Fig. 5, is made from a single piece of white pine or redwood.
It should be 3/4 or 1 in. thick.
Two or three 3/8-in. dowels or 1/4-in. brass rods will lessen the danger of splitting.
This type of board lends itself to striking decorations, and it is a good idea to paint an unusual pattern with bright colors, as suggested in Fig. 6.