pods for primates : a catatogue of surfboards in australia since 1900
Charles Warren Stoddard : A Trip to Hawaii, 1901.


Introduction.
This  promotional booklet of 48 pages was published by the Oceanic Steamship Co. in1885, based upon several previous visits to Hawai'i  by Charles Warren Stoddard.
Apparrently, while the essential text, with the inclusion of passages from South Sea Idyls (Cruising the South Seas) was retained, the various editions varied in the iliustrations.

A new edition, slightly smaller at 46 pages, was issued in 1892  with an early photographic plate which depicting surf riding (?).
The book was reprinted in 1897, and a further edition published in 1901.

With the1897 and 1901 publications there was a change to the cover and added illustrations, some of which were coloured.
These later editions featured a coloured illustration of a surfboard rider framed by Diamond Head on the cover.

The 1901 edition also included a black and white photograph of  a Hawai'ian native holding a surfboard and wearing a malo (loincloth) on Waikiki Beach.
Tim DeLaVega accredits the photograph to Frank Davey, one of several known to be taken of Charles Kauha with his surfboard at Waikiki in April 1898, although none of him surf riding.
The photograph also appeared on a postcard published by the Island Curio Store, Honolulu, around this time.
The photographs and illustrations are not accredited.

In the introductory notes there is a brief mention of surfriding, in the original text Stoddard only refers to sea bathing.
There are some revelant descriptive passages of the island geography.

The fifth edition notes that some of Stoddard's original text has been adjusted following the fall of the Hawaiian Republic in 1897and annexation by the United States.

In the late 20th century, Summer Cruising in the South Seas  was noted for its homoerotic themes, fully discussed in Roger Austin's introduction to the 1987 edition.

Many things have happened in the little island country of Hawaii, set far out in the wide Pacific, since 1885, the year when Charles
Warren Stoddard visited it and wrote " A Trip to Hawaii," still the best known and most admired book on these isles of the
Blessed.
His tender and sympathetic insight into the tropic people and all their concerns, his keen enjoyment and appreciation of all the varied phases of the delightful journey, his artist's eye to see and artist's hand to picture forth the beautiful aspects of nature where nature is most prodigal of her charms, all unite to make his writings on Hawaii dear to every one that loves the beautiful in nature and in literary art.

So it becomes necessary to issue a fifth edition of this little volume and to alter the introduction to Stoddard's graceful chapters, so that it shall take note of these changes and testify to all the world that the charm of Hawaii is in itself, and not in its form of
government, that no revolution or political change can take away from the inherent enjoyableness of a trip to the land of afternoons, and to show how by increase of facilities it is now easier than ever before to visit all the many places of interest and delight in beautiful Hawaii Nei.

But all too soon the excitement rises as to which of the passengers shall first convince himself that the sailors are right in saying
that the tiny cloud on the far horizon is really land.

At last the most skeptical are conquered and gradually the blue cloud unrolls itself into a fair green island, and soon the ship has
made her way through the reef and lies in the placid harbor, at a wharf covered with an interested and interesting crowd.

This crowd is far more cosmopolitan than it was a few years ago.
Then the dark-eyed Kanakas were in great majority, and now, though there are more of them than of any one nationality, they are not much more numerous than the Japanese, the Chinese, or the Portuguese.
The Americans, however, are the predominant race, the people who own property, run businesses, and occupy all places of responsibility.

On one side is the blue water over which he has lately come, with its white fringe of restless breakers; nearer, the quiet harbor
with ships of several nations.
On the other side is the Pali and the famous Punch Bowl, pretty good mountains, their rugged sides covered far up with the luxuriant tropical foliage, and close about him are the shaded streets of Honolulu, the pretty houses peeping out from the palms and tree ferns, the banana and lantana trees.

To see all the Government buildings and trace the historic localities connected with the various revolutions will take at least
two days ; for it is not a climate that stimulates to undue activity.
Then there is the Bishop Museum to see, a fine stone building filled to overflowing with the most extensive collection in the
world of South Sea and Hawaiian antiquities and curios.
Many important articles that had been taken away from the Islands were sought out and brought back to make every department of this fine collection complete.
Here may be studied the curious ancient customs and religious observances of the Kanakas and other island peoples, their strange gods, their primitive but formidable clubs and war spears, their curious garments made of feathers, and all the objects that bring back this ancient life.
In the yard is the famous statue of Kamehameha the Great, looking the famous warrior he is said to have been.

Then there is the drive to Waikiki Beach, the watering place annex to Honolulu.
This will perhaps be your first chance to see the famous swimming of the Kanakas, men and women.
They sport in the outer line of breakers, coming in over them on their surf boards in a way that looks charmingly easy until you see some enthusiastic and over-bold foreigner try it, and get rolled over and over, to his great discomfiture.
They will serve you dinner in one of the beautiful flower-covered lanais, and you will sit there till the brilliant white moonlight, and the blazing, low-hanging stars give the night a witching glory.
This will be enhanced by the sweet singing of native minstrels, whose liquid melodies voice the very spirit of the place.

Drives to the Pali and the Punch-Bowl will give excitement enough for two days.
The Pali is that historic mountain and precipice overlooking Honolulu where Kamehameha the Great is said to have overcome the last of his foes, and to have driven them in great numbers over the dizzy brink.
No warlike tale is needed, however, to give the trip interest.
The beauties of the tropical flora on the earlier parts of the drive and the gradually opening view as the road begins to wind up the steeper ascent are reward enough.
When at last the voyager leans against the slender railing that marks the very verge and looks over the great expanse of the blue ocean, the quiet city that lies at his feet, the beautiful sweep of the beach, curving out to where Diamond Head like a silhouette of a sleeping form marks the horizon in one direction, and all the expanse of emerald hills and smiling valleys before him, he will surely declare the sight worth coming half way round the globe to see.

Of course, our voyager by this time has on a pair of the most approved style of " sea legs," and is not troubled by the somewhat
choppy seas of the island channels.
Thus he can enjoy to the full the pleasure of coasting about the fertile shores of Oahu, and touching occasionally at the most seemingly impossible landings and swinging off passengers and freight into lighters as the great swell lifts the boats together.
It takes a brave soul to attempt these landings, though use has robbed them of their terrors for the dwellers in these ports.

But it is high time to cease this introduction and let Mr. Stoddard's voice be heard on the subject that has brought forth his very best work.

On the morning of the seventh day, an island rises like a small blue cloud out of the sea; then another, and yet another, and
toward the last, we make our way.
Green with a verdure that never fades; brown with the bronze tints of lava-flows that have been cold for centuries; a beach of dazzling whiteness, fringed with groves of cocoa palms; the sea like a huge emerald, with sunshine reflected upon the coral bottom, and brilliantly tinted fish sporting about us;  it is thus that we approach Honolulu at noon on the seventh day.

Looking at Diamond Head from the sea, the volcanic shore promises nothing of the beauty that is harbored in the vernal vales
beyond it; but the moment our good ship rounds the point of the famous head-land, the fairy-like coast line is suddenly revealed.

It is a transformation scene.
The mountains turn gloriously green.
Valleys, vistas in Eden, dawn upon the eye in quick succession.
The sea rises in long voluptuous waves and fawns upon the reef, while within the surf the tranquil water is like a tideless river, where only the water-lilies are lacking; but in their stead, are troops of Hawaiian swimmers veritable water nymphs with a profusion of glossy locks floating about their shoulders like seaweed.

By this time the sea is littered with cocoanuts, but they are curly headed, most of them, and clamorous, for the dime-divers of Hawaii doff their garments at the shortest notice and disport themselves amphibiously so long as there is a prospect of raising another nickel out of the vasty deep.

Canoes dart upon the water as if they were living things, part fish, part flesh, part fowl, with one skeleton wing for an outrigger,
a fin paddle, and a bare, brown Kanaka amidships.
Fish baptize themselves by immersion in space, and keep leaping into the air like momentary inches of chain lightning; there is the perpetual boom of the surf, the clang of joy-bells on shore, and a possible shower in the refreshing cloud that is stealing down from the heights.
"Three cheers and a tiger," for the voyage has come to an end.

But what should we do to be saved from shameless indolence ?
First ride or drive to the beach and bathe in a sea that rolls up warm from the Equator.
We can go en masse in the 'bus,* or we can foot it if we are touched with the pedestrian craze, for three miles even in this climate are not too many for an appetizer.

One may plunge for hours in the reef-girdled lagoon at Waikiki ...

Footnote: * The primitive 'bus is now supplanted by a street railroad.

... without fear of taking a chill; there are bathing suits there, and canoes, and a long easy swell on which to undulate ; and there is
the Park to ride or drive in, and the beautiful highways and the more beautiful byways between the Park and the Town, where
every sense is gratified at the self-same moment.

...and life at the beach really begins.

It begins with a sunset across a tropic sea, and a twilight that seems longer than common in this vicinity; sometimes there are
shadowy ships in this twilight, and there are always canoes enough afloat to make one wish to quote the easy lines about "autumnal leaves" and "brooks in Valombrosa. "

Hilo is a cluster of summer houses hidden among palms and bread-fruit trees, where the rain is said to fall perpetually ; perhaps it is for this reason that Hilo is the most tropical in appearance, as it is certainly the most beautiful of Hawaiian
hamlets.

What a shore it has !
A crescent with a row of houses facing it, where the tenants seem to have little else to do than

" To watch the crisping ripples on the beach,
The tender curving lines of creamy spray."
Between pages 44 and 45, b. 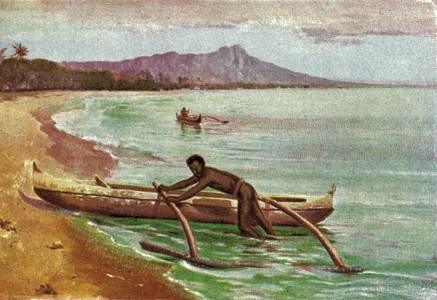