Introduction.
Charles de Varigny, French author, lived for 14 years on the Hawaiian Archipelago and was initially the secretary of the French consulate in Honolulu
Later he was an advisor to the King Kamehameha V, Minister for Finance 1864 and then Minister for Foreign Affairs 1865-1868.

I have been unable to determine the location of the report.

I assume the text in brackets has been added by the translator to improve explanation.

There only a reference to the board's light weight, and no account of the board's other features or dimensions.

The author notes the decline of surf-riding activity, similarly to Knox : Surfing at Hilo, circa 1888.

With judicious reading, the article appears to imply that the rider slides diagonally across the wave face, and furthermore it could be seen as the first report of a "tube-ride", see Note #8, below.

The two accompanying illustrations are probably reconstucted from the author's text, field notes, sketches  and/ or verbal input.
It is unlikely the artists witnessed surf-riding in Hawaii, see Notes #11 and #12.
Riou's image has a significant inconsistancies.


"... In the instant there-after, he reappeared on the surface of the water (2), and, using his hands like two oars, he directed the point of this "canoe of a new genre" (3) toward the growing (swelling) wave.

One could see him then rising on the crest of the waves, descending again, and climbing anew.

After gaining a certain distance from the, beach, he scanned the horizon until a wave stronger than all the others loomed. (4)

The light board, easily maneuvered, was raised like a feather on the crest of the [wave], and [returned] to the shore with the speed of a galloping horse."

Paragraph
"I saw a native accomplish this 'tour de force' while upright atop the board. (5)

The smallest movement would make him capsize. (6)

The man seemed attached to the board and the board itself was one with the surf. (7)

The foam enveloped him, one could see only the outline of his body, and he moved forward with the spray without directing from a straight line and without staggering." (8)

Paragraph
"Almost all of the old games of the natives were of the same type. (9)

Defiant of danger, natural forces and performed in cold blood were their main attractions.

The chiefs (masters) excelled at these exercises but now there are few traces of the games left.
Thus they had reason to to live, today the cult of body strength has disappeared with its utility." (10) 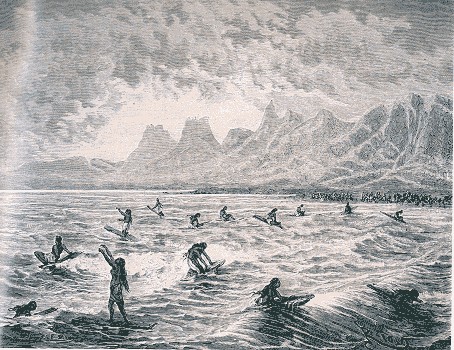 2. Probably while padding out "... In the instant there-after, he reappeared on the surface of the water

3. "canoe of a new genre"
A surfboard of indeterminant dimensions.

4. "After gaining a certain distance from the, beach, he scanned the horizon until a wave stronger than all the others loomed."
Indicates wave selection.

5. "while upright atop the board."
The rider was in a standing position.

6. The smallest movement would make him capsize.
Precise technique was required to avoid a wipe-out.

7. the board itself was one with the surf.
Probably an attempt to describe the transverse motion of the board in the curl.
This is further expanded ...

8. "The foam enveloped him, one could see only the outline of his body, and he moved forward with the spray without directing from a straight line and without staggering."
The specific indication that the ridder proceeded in a straight line can only have two possible interpretations ...
a. The ride was directly to the beach (which is not reported by similar accounts) and the rider was "enveloped" by the white water.
b. Following from 7 above, if the ride was transversed the wave face, then from a contempoarary perspective, it is almost impossible to read this sentence without considering that the writer is attempting to describe what is commonly termed a "tube ride".

10. "... there are few traces of the games left"
Reports the decline of surf-riding and other traditional activities after European contact, see  Knox (1888)

11. "Emile Bayard  (1837-1891) - French illustrator
Emile Bayard was born in La Ferté-sous-Jouarre in 1837.
Cogniet's pupil, he published cartoons in newspapers since he was only 15, sometimes under the pen name of Abel de Miray.
He made several drawings on wood using graphite.
Emile Bayard drew also posters and boards.
As illustator, he never used photographic documents and always tried to have a meeting with the author.
The real success of illustration should be that the reader, just by looking at the paintings, understands the book.
Bayard made some drawings on current events, such as Victor Hugo's death.
He actively collaborated with "Bibliotèque des merveilles", published by Hachette.
He died in Cairo in 1891.


12. "Edouard Riou (1833-1900) is the first and undoubtedly the most recognized illustrator of Vernes Voyages Extraordinaires.
He illustrated Vernes earliest and most famous novels, including Cinq semaines en ballon, Voyage au centre de la terre, (#19), Les Voyages et aventures du capitaine Hatteras, Les Enfants du capitaine Grant [The Children of Captain Grant, In Search of the Castaways], as well as the first eleven chapters of Vingt mille lieues sous les mers (the remaining chapters were done by Alphonse de Neuville).
Before and after his association with Hetzel, Riou specialized for many years in landscape painting and commemorative pieces (the opening of the Suez Canal, the marriage of the Russian tsars daughter, etc.).
A student of the famous French artists Daubigny and Gustave Doré, he was very well known in France during the 1850s, 60s, and 70s, and he contributed illustrations to a wide variety of French books and popular magazines throughout this periode.g., Dumas Le Comte de Monte-Cristo, Scotts Ivanhoe and Waverley, Hugos Notre Dame de Paris and periodicals like Tour du monde, Illustrated Times, and La Chronique illustrée. "

Leuras (1984) Page 52, notes that that the illustration has "a Tahiti-like backdrop".
Furthermore, there are several standing riders apparently riding away from the beach.
This is probably a failure in understanding by the illustrator.